World COPD Day is a global effort to expand understanding of chronic obstructive pulmonary disease - COPD and advocate for better care for patients. In 2004, 64 million people had the illness and WHO predicts that COPD will become the third leading cause of death worldwide by 2030. 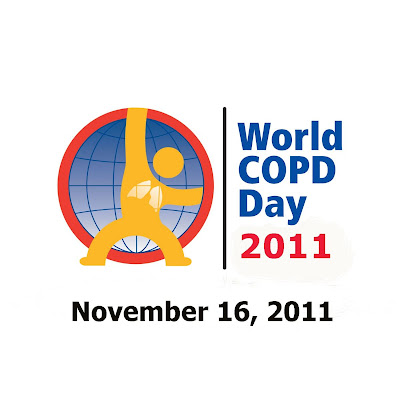 Organized by the Global Initiative for Chronic Obstructive Lung Disease (GOLD), the Day is marked by activities implemented by health care professionals and patient groups throughout the world.
Respiratory Decade active participate every year in organization and promotion of World COPD Day!

If you are blogger we invite you to share your posts about COPD and World COPD Day in your country!!! Upload it HERE!
Posted by Alexandru Corlateanu at 8:07 AM No comments:

During the European Respiratory Society Annual Congress Sophie Lieberoth from Copenhagen University presented a curious study about the connection between asthma treatment and alcohol intake.


There is a vast range of studies concerning the hazards and benefits of alcohol. Some studies proved that frequent alcohol consumption (1-2 times/day) increases the chances of good health in old age by 30%. The authors of another work have found that consumption of one glass of wine a day helps you lose weight.


Danish researches established that drinking alcohol in moderate quantities can reduce the risk of developing asthma. In this way, drinking 1-6 units of alcohol a week could reduce the risk of developing the condition. But what is considered to be a unit of alcohol? A half pint (284 ml) of beer that has a strength of 3.5% abv contains almost exactly one unit or a medium glass (175 ml) of 12% abv wine contains around two units of alcohol.


The research examined 19,349 twins between the ages of 12 and 41 years of age. All participants have completed a questionnaire at the start and end of the study to compare alcohol intake with the risk of developing asthma over 8 years. The results showed that the lowest risk of asthma was seen in the group which had a moderate intake of alcohol, as less than 4% of those who drank 1-6 units per week developed asthma. 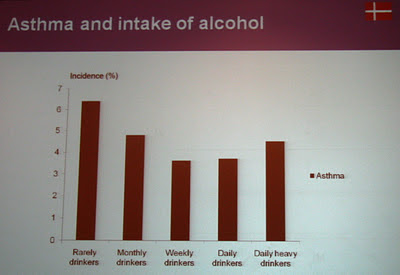 Another important point of the study was that a preference for beer drinking was associated with an increased risk of asthma when compared with no preference.


It was concluded that higher incidence of asthma development occurs in the never drinking and rarely drinking group.


The relationship between alcohol intake and the risk of developing adult-onset asthma could be U-shaped, but still there is a need of further investigation. What needs no basis or explanation is the old French Proverb which states: “Eat with pleasure; drink with measure.”
Posted by Alexandru Corlateanu at 4:31 AM No comments:

We are happy to invite you at Firenze, Italy at International Conference: Seminars of Interventional Pneumology, which will take place at 28 October 2011, organized by great friend of Respiratory Decade Professor Lorenzo CORBETTA.
Prof. Corbetta is an opinion leader in Italy in interventional bronchoscopy for many years. Much of his career has been devoted to the implementation of bronchoscopic laser resection and stenting and novel endoscopic technologies and also to the development of new teaching methods. He was elected President of the Interventional Pulmonology and Thoracic Surgery Working Group of the Italian Society of Respiratory Medicine in 2006 and currently holds this position. 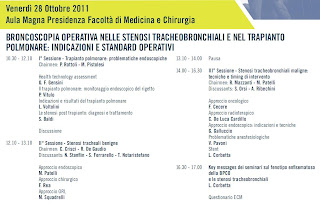