Chronic obstructive pulmonary disease and asthma are the most frequent chronic respiratory diseases that affect the general population. For a long period of time these two conditions were considered to be separate diseases. However, it became evident that some patients share symptoms and clinical findings from both diseases.

These patients are considered to represent a distinct phenotype, called asthma-COPD overlap syndrome (ACOS). However, since approximately the one third of the asthmatics smoke the ACOS may primarily define those patients. This is a relatively newly defined clinical syndrome whose underlying mechanisms and most appropriate management remain to be confirmed. In this review, we summarize current knowledge on this syndrome, aiming to update clinicians and help their daily practice.
Free full text:
https://copdrp.biomedcentral.com/articles/10.1186/s40749-017-0025-x
Posted by Alexandru Corlateanu at 7:14 AM 1 comment:

In a 28-week randomized, controlled trial, we assessed the effects of benralizumab (at a dose of 30 mg administered subcutaneously either every 4 weeks or every 8 weeks [with the first three doses administered every 4 weeks]) versus placebo on the reduction in the oral glucocorticoid dose while asthma control was maintained in adult patients with severe asthma. The primary end point was the percentage change in the oral glucocorticoid dose from baseline to week 28. Annual asthma exacerbation rates, lung function, symptoms, and safety were assessed.

Conclusions
Benralizumab showed significant, clinically relevant benefits, as compared with placebo, on oral glucocorticoid use and exacerbation rates. These effects occurred without a sustained effect on the FEV1.
Free full text:
http://www.nejm.org/doi/full/10.1056/NEJMoa1703501#Top
Posted by Alexandru Corlateanu at 10:36 PM 1 comment:

Over the past decade, major advances have been made in the management of advanced non-small cell lung cancer (NSCLC). There has been a particular focus on the identification and targeting of putative driver aberrations, which has propelled NSCLC to the forefront of precision medicine. Several novel molecularly targeted agents have now achieved regulatory approval, while many others are currently in late-phase clinical trial testing. 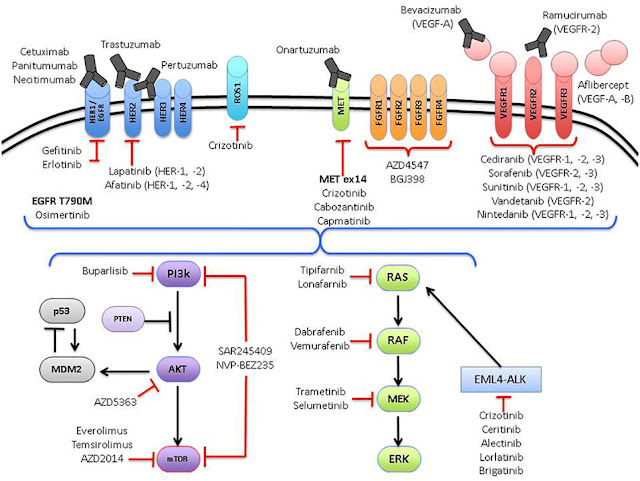 These antitumor therapies have significantly impacted the clinical outcomes of advanced NSCLC and provided patients with much hope for the future. Despite this, multiple deficiencies still exist in our knowledge of this complex disease, and further research is urgently required to overcome these critical issues. This review traces the path undertaken by the different therapeutics assessed in NSCLC and the impact of precision medicine in this disease. We also discuss the areas of “imprecision” that still exist in NSCLC and the modern hypothesis-testing studies being conducted to address these key challenges.
Free full text
Posted by Alexandru Corlateanu at 10:55 AM 1 comment: 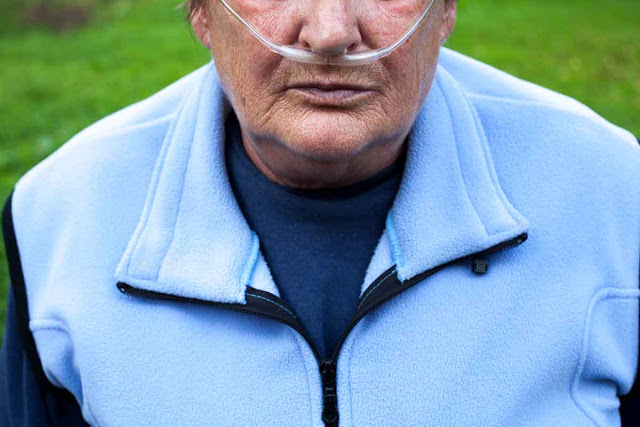 Although current guidelines consider LTOT only in patients with severe resting hypoxemia, many COPD patients with moderate to severe disease experience moderate hypoxemia at rest or during special circumstances, such as while sleeping or exercising. The efficacy of LTOT in these patients who do not meet the actual recommendations is still a matter of debate, and extensive research is still ongoing to understand the possible benefits of LTOT for survival and/or functional outcomes such as the sensation of dyspnea, exacerbation frequency, hospitalizations, exercise capacity, and quality of life. Despite its frequent use, the administration of “palliative” oxygen does not seem to improve dyspnea except for delivery with high-flow humidified oxygen. This narrative review will focus on current evidence for the effects of LTOT in the presence of moderate hypoxemia at rest, during sleep, or during exercise in COPD.
Full text link:
http://www.tandfonline.com/doi/full/10.1080/15412555.2017.1319918
Posted by Alexandru Corlateanu at 10:42 AM 2 comments:

Lung cancer is the leading cause of cancer-related death worldwide, with non–small-cell lung cancer (NSCLC) being the most common type. Large-scale sequencing studies have revealed the complex genomic landscape of NSCLC and genomic differences between lung adenocarcinomas and lung squamous-cell carcinomas. However, in-depth exploration of NSCLC intratumor heterogeneity (which provides the fuel for tumor evolution and drug resistance) and cancer genome evolution has been limited to small retrospective cohorts. Therefore, the clinical significance of intratumor heterogeneity and the potential for clonality of driver events to guide therapeutic strategies have not yet been defined. 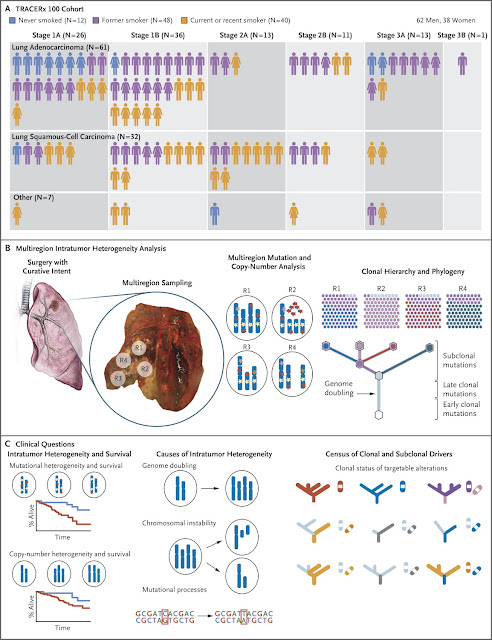 Tracking Non–Small-Cell Lung Cancer Evolution through Therapy (TRACERx) is a multicenter, prospective cohort study, which began recruitment in April 2014 with funding from Cancer Research UK. The target enrollment is 842 patients from whom samples will be obtained for high-depth, multiregion whole-exome sequencing of surgically resected NSCLC tumors in stages IA through IIIA. One primary objective of TRACERx is to investigate the hypothesis that intratumor heterogeneity — in terms of mutations (single or dinucleotide base substitutions or small insertions and deletions) or somatic copy-number alterations (reflecting gains or losses of chromosome segments) - is associated with clinical outcome. Here, we report on the first 100 patients who were prospectively recruited in the study.
Read Full text:
http://www.nejm.org/doi/full/10.1056/NEJMoa1616288#t=articleTop
Posted by Alexandru Corlateanu at 12:27 PM 2 comments:

Introduction: Our knowledge about lower respiratory tract infections (LRTIs) has improved substantially in the last years, but the management of respiratory infections is still a challenge and we are still far from precision medicine in the treatment of LRTIs. 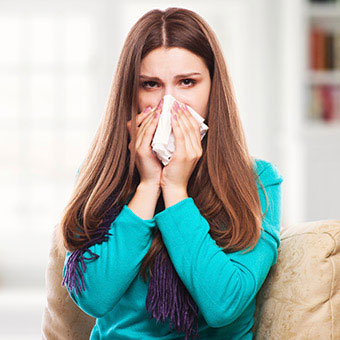 Areas covered: The approaches developed in recent years to improve the pharmacotherapeutic management of LRTIs, such as novel diagnostic assays to facilitate medical decision-making, attempts for selecting an optimal empiric antibiotic regimen, and the role of new and possibly unproven adjunctive therapies, are described.
Expert opinion: Early and appropriate antibiotics remain the cornerstone in the treatment of LRTIs. The updated trend is to apply antimicrobial stewardship principles and initiatives to optimize both the management and the outcomes of LTRIs. Biomarkers, mainly C-reactive protein (CRP) and procalcitonin (PCT), can improve the diagnostic and prognostic assessment of LRTIs and aid to guide antibiotic therapy. The widespread use of antimicrobial agents has greatly contributed to faster development of antibiotic resistance and the emergence of opportunistic pathogens, which substitute the indigenous microbiota. However, very few new antibiotics in development to overcome existing resistance and ensure continued success in the treatment of LRTIs have been approved, likely because antibiotic stewardship programs discourage the use of new agents.
Full text:
http://www.tandfonline.com/doi/abs/10.1080/14656566.2017.1328497
Posted by Alexandru Corlateanu at 9:20 AM 5 comments:

The Global Initiative for Chronic Obstructive Lung Disease (GOLD), an international committee of experts, has recently published its updated report on diagnosis and management of Chronic Obstructive Pulmonary Disease (COPD). Compared to the previous version, this documents has been an extensively revised: the definition has been simplified, highlighting the importance of respiratory symptoms, and disease development is further discussed, including new insights on lung development. Spirometry is still required for the diagnosis, and it is described as fundamental tool for evaluating prognosis, disease progression, and non-pharmacologic treatment.

However, differently from the previous version, spirometry is no longer included in the ABCD tool (ie, a practical tool proposed to assess COPD symptom burden and guide pharmacologic treatment), which is now centered exclusively on respiratory symptoms and history of exacerbation. Subsequently, pharmacologic treatment has been shifted towards a more personalized approach, reflecting the ongoing process toward a comprehensive, patient-tailored management.
Free full text:
https://copdrp.biomedcentral.com/articles/10.1186/s40749-017-0024-y
Posted by Alexandru Corlateanu at 9:46 PM 2 comments:

Asthma is highly prevalent, often starting in infancy and persisting throughout life, and is associated with high morbidity and burden. It is a major global health challenge with growing impact, affecting more than 300 million people worldwide and at least 10% of all Europeans. Furthermore, it is the most prevalent long-term condition in children. Approximately 5–10% of asthma cases are so severe that current treatments do not work, and over five million people in the European Union (EU) fall into this category. 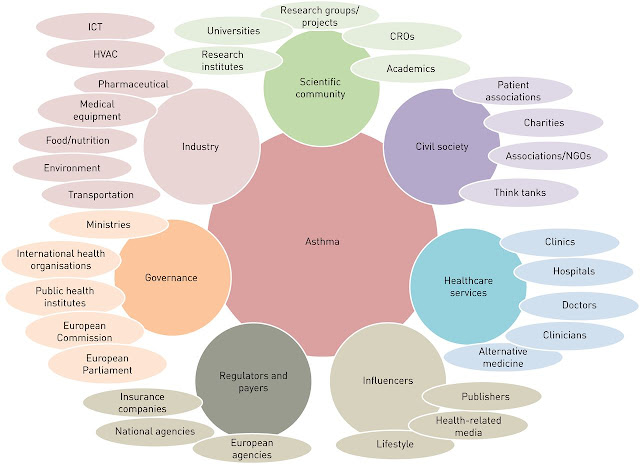 People with asthma live at risk of life-threatening asthma attacks, leading to at least 500 000 hospitalisations worldwide each year. A European study estimated that unscheduled care and rescue medication accounted for 47% of the total cost-per-patient in infants, 45% in children and 56% in adults. This results in high socio-economic impact, estimated at more than €70 billion annually. This includes the costs of direct primary and hospital healthcare (estimated to be close to €20 billion per annum), costs due to lost productivity (€14 billion), and the monetised value of disability-adjusted life-years (DALYs) lost (over €38 billion). Close to 1 million DALYs are lost due to asthma in Europe every year.
Despite the fact that the direct and indirect costs of asthma are substantial and continue to rise, asthma remains under-prioritised in the EU research agenda. Only 0.5% of the Seventh Framework Programme (FP7) health research budget was devoted to asthma and chronic obstructive pulmonary disease (COPD) (€30 million). In comparison, some 5.4 times this amount (over €163 million) was spent on cardiovascular conditions and some 20.6 times (over €618 million) on brain research.
Asthma, with its high global prevalence and an associated multi-billion global market for treatments, plus its historical underfunding and the demand for new treatments and diagnostics, represents an enormous opportunity to drive substantial economic growth. This paper sets out how the EU may capitalise on this via investment in research with high commercial potential that can radically improve the EUs research agenda and public health.
Free full text:
http://erj.ersjournals.com/content/49/5/1602294
Posted by Alexandru Corlateanu at 12:11 PM No comments: