We are continuing Sunday Respiratory Video posts.
A trio of lungs breathing. Created during a residency at Oboro in Montreal, it is a prototype for the project Breath I/O (Chorus of Lungs).

Dear Respiratory friends, we are happy to launch LUNGUAGE and ReSpublic: two new Respiratory Resources. Here we will share all new information about all respiratory!

We are encouraging everybody to share with us all relevant respiratory resources, because LUNGUAGE and ReSpublic will be the First Free open sources of Respiratory information for Health care professionals, patients and all public interested in lung health!

Posted by Alexandru Corlateanu at 6:54 AM No comments:

Dear Respiratory friends, we are happy to launch LUNGUAGE and ReSpublic: two new Respiratory Resources. Here we will share all new information about all respiratory!

We are encouraging everybody to share with us all relevant respiratory resources, because LUNGUAGE and ReSpublic will be the First Free open sources of Respiratory information for Health care professionals, patients and all public interested in lung health!


Our LUNGUAGE is Respiratory!
Posted by Alexandru Corlateanu at 5:18 AM No comments:

In only two days will be started Olympic Games 2012 at London! Traditionally Olympic Games is a celebration of sport and health. This year for the second time is having place World Spirometry Day, which was organized at 27 June 2012!

WSD this year was dedicated to Olympic Games, because this a wonderful chance to make visible for general population lung conditions.

The concept behind this year’s activities is to use the Olympics as an inspiration to get people interested in spirometry testing and to educate them about their lung health and its importance for a healthy and active life. It also aims to ensure that people with lung disease feel that they can keep moving and keep active to ensure that they have fulfilled lives with optimal lung health.
Another link between Olympics and Lung health: the very well known fact that many athlets are having asthma. It was described and defined 100 years A.D. by Araeteus the Cappodican: ‘‘If from running, gymnastic exercises or any other work, the breathing become difficult, it is called asthma’’.
Exercise-induced asthma is caused by heat loss and water loss through respiration during exercise, leading to mediator release in the airways and to increased parasympathetic nervous activity in the airways, thereby causing constriction of bronchial smooth muscle and increased bronchial secretions as well as vasodilation in the bronchial vessels. Development of asthma and bronchial hyperresponsiveness in the competing elite athlete is presently considered to be caused by the frequently repeated increased ventilation occurring during training and competitions.

Posted by Alexandru Corlateanu at 4:19 AM No comments:


Chorus of Lungs from Maria Lantin on Vimeo.
In the interactive video installation, in progress, Chorus of Lungs, Tulip Theory (Leila Sujir & Maria Lantin) explore the social body, its voice and breath through 3D video and audio projections. Sounds of breathing ebb and flow, a chorus of lungs floats in the gallery, sharing a space with the viewer. The viewer is invited to make a gesture with their hands—pushing the hands together, then pulling the hands apart, actions which compress or create a space for the lungs to become a chorus both visually and audibly.
Posted by Alexandru Corlateanu at 12:42 AM No comments:

Idiopathic Pulmonary Fibrosis (IPF | Fibrosi Polmonare Idiopatica) is a disease characterized by progressive scarring, or fibrosis, of the lungs. It is a specific type of interstitial lung disease in which the small air sacs of the lung, known as “alveoli,” gradually become replaced by fibrotic (scar) tissue. The abnormal fibrosis and scar formation typically begins in the terminal areas of the pulmonary tree lining the air sacs where gas exchange occurs. Normally, this tissue is a thin layer consisting of a few, easily permeable cells. With IPF, progressive scarring causes the normally thin and pliable tissue to thicken and become stiff, making it more difficult for the lungs to expand, preventing oxygen from readily getting into the bloodstream. 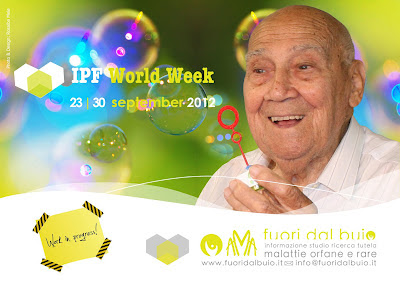 There is a corresponding increase in respiratory symptoms with dyspnea, air hunger and a non-productive cough. Idiopathic, or of unknown cause, IPF is not thought to be related to any other disease or condition, such as cancer or asthma. IPF is a uniformly fatal disease, with an estimated median survival time of two to five years. There are currently no medicines approved by the U.S. Food and Drug Administration (FDA) or European Medicines Agency (EMA) for the treatment of patients with IPF.

There are no known causes for IPF. However, the disease is typically found in people between the ages of 40 and 80, and affects more men than women. Cigarette smoking may increase the risk of developing IPF. Some cases of IPF occur in patients who have family members with the disease, which suggests that genetic factors may contribute to the risk of developing IPF in certain individuals.

Although these risk factors are associated with IPF, it is important to remember that they have not been shown to cause IPF -- the cause of IPF is still unknown.

Once considered a relatively rare disease, IPF is now recognized as the most common interstitial lung disease (interstitial refers to the tissue surrounding the alveoli).
An estimated 100,000 people are living with IPF in the United States, and more than 30,000 new cases are diagnosed annually.
The incidence of IPF is greater than that of ovarian cancer, similar to those of pancreatic cancer and of all leukemias combined, and nearly 30 times that of cystic fibrosis.
73% of patients with IPF are > 65 years of age.
The 5-year mortality rate for patients with IPF is 50% to 70%.

To create a teaser for the event, Rosalba Mele developed a poster and a banner that can be attached to emails or posted on associations` websites. The poster and banner allows for any
association using it to personalize with their own logo. The image used in the poster/banner is intended
to make people smile and soften their hearts: Two elderly people blowing soap-bubbles or balloons
who are happy because they have the breath to do so. This is intended to be a starting point to discuss
the disease and its symptoms. 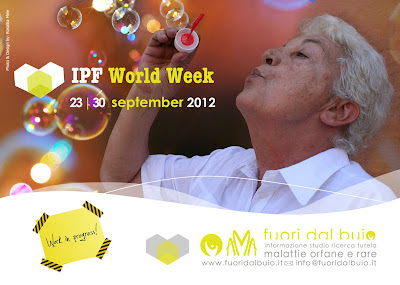 All the graphics will be available for free to any association interested in participating in IPF World Week.

World Spirometry Day 5-km Lung Run: Do you run with us at Vienna? 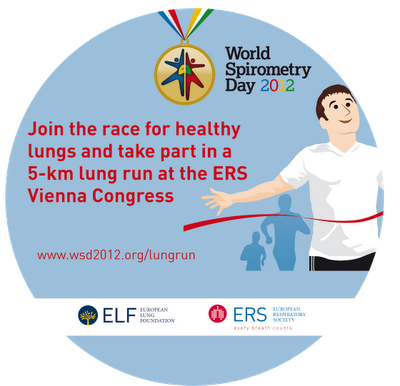 This is your chance to be a lung champion and to bring the baton home for your country, university, institution or company.
Posted by Alexandru Corlateanu at 3:40 AM No comments:

At the end of June, I participated in European Respiratory Society (ERS) School dedicated to Pulmonary Hypertension and Pulmonary Vascular Disease, which took place at Lausanne, Switzerland.
This course was designed to provide a comprehensive overview of the current state of pulmonary hypertension and pulmonary vascular disease and to understand the processes of diagnosis and management of the various pulmonary vascular conditions.
The ERS course was prepared and organised by world-known faculty: Professors A. Peacock (UK), R. Naeije (Belgium) and S. Gaine (Ireland). 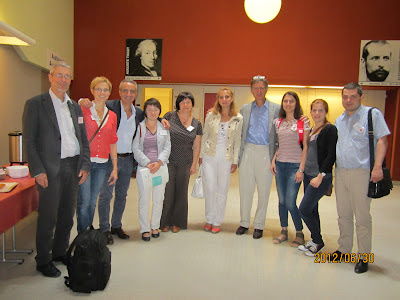 
The course also discussed diagnostic techniques and new treatment modalities to help physicians managing their patients in association with their pulmonary hypertension centres.
In very short time all presentations from this Course will be published on official site of ERS: www.ersnet.org. 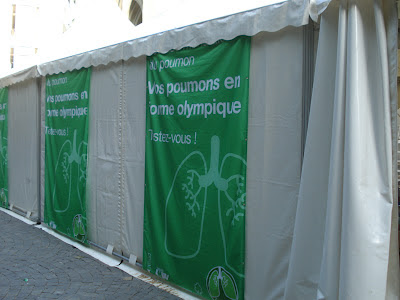 World Spirometry Day 2012 in Lausanne
Posted by Alexandru Corlateanu at 10:43 AM No comments:

Defining COPD: from simplistic approach to multilateral assessment of COPD

A source for current research, diagnostic and management techniques for patients with respiratory-related disorders 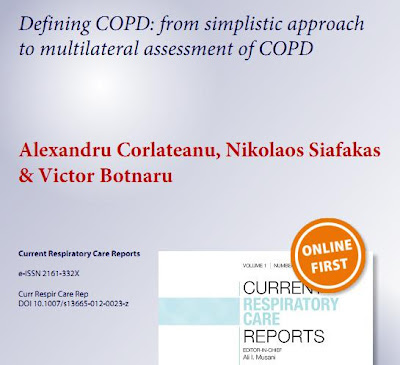 Defining COPD: from simplistic approach to multilateral assessment of COPD

Abstract  of my article:

Chronic obstructive pulmonary disease (COPD) is a multisystemic pathology, which cannot be characterized, diagnosed or assessed only by the severity of airflow limitation. Thus, it appears there is urgent unmet need of new approach in COPD. In this article we review the most recent multidimensional classification of COPD, based on analysis of functional and physiologic parameters, health status, and risk of exacerbations. A, B, C, D system will permit a more accurate risk stratification of patients. In addition, new trends are presented in assessment of COPD: from phenotypes, multidimensional indices, scale-free networks and diseasome to radical concept of P4 medicine (Personalized, Predictive, Preventive, and Participatory elements).

Posted by Alexandru Corlateanu at 3:41 AM No comments:

Tomorrow, on 5th July 2012 Professor Lorenzo Corbetta will organize Great Cycling group tour in Firenze, Italy. This special event will be dedicated to World Spirometry Day 2012. We are happy to invite you to join this Respiratory event! 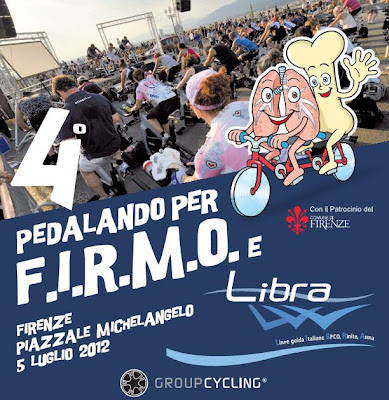 Event will take place in the historic center of the city Firenze! Free spirometries will be provided by specialists in respiratory medicine, also will be shared information about respiratory diseases and the most frequent risk factors!

Posted by Alexandru Corlateanu at 12:38 PM No comments: