Year of the Lung at European Respiratory Society Congress, Barcelona 2010

Declared the Year of the Lung, 2010 reached its zenith at the ERS Congress that took place in Barcelona, September 18-22. The incredible attendance of 22 000 people made this Congress the largest event that united worldwide specialists in respiratory medicine.
During the opening ceremony ERS President Prof. N. Siafakas mentioned that Year of the Lung (YOTL) is a daring initiative which stresses the importance of public awareness and health system. He pointed out that the combat of lung diseases needs cohesion of different forces, namely those of public, media, governments, research funders.
Sunday, 19th September the major scientific advances in the field of respiratory medicine were discussed at the ERS press conference. Prof. N. Berend, President of the Forum of International Respiratory Societies (FIRS) for 2011 referred to the concept Year of the lung that was developed by FIRS because of growing global burden of lung disease, insufficient preventive strategies, inadequate clinical care and low research funding. Furthermore, he reminded that there are 4 respiratory diseases (Lower respiratory tract infections; Chronic obstructive pulmonary disease; Tuberculosis; Trachea, bronchus, lung cancers) among the leading causes of death worldwide (WHO global burden of disease report, 2004). Cigarette smoking, occupational dusts, fumes and gases, air pollution and biomass fuel smoke were discussed as the main COPD risk factors. Subsequently, the attention was drawn to the YOTL website which contains useful information, educational materials, materials for media, advocacy, public relations, and participating organizations. 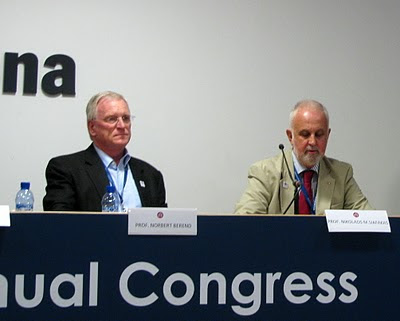 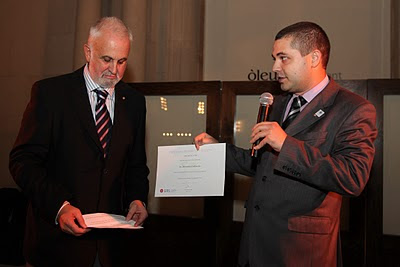 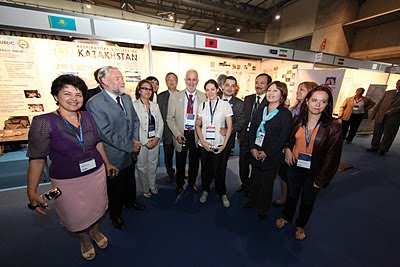 President of ERS 2010 N. Siafakas with L. Corlateanu and A. Corlateanu
(Year of the Lung FB Team) in the time of President’s Tour of World Village
In the long run, all the events and initiatives organized throughout the Year of the Lung are related to the creation of a social movement whose goal is to raise awareness about respiratory diseases.
*Corlateanu Liudmila,
member of International Francophone Press Union