Today we are publishing abstract which was presented by doctor Maria Vera Cruz de Oliveira from Hospital do Servidor Público Estadual and ABRADAT (Associação Brasileira de Deficiência de Alfa 1 Antitripsina/Brazilian Association of Alpha 1 Antitrypsin Deficiency) on last American Thoracic Society (ATS) meeting.
We are grateful for this post to our most active member from Brazil: Marilia Varella!

Introduction
Alpha 1 Antitrypsin Deficiency (A1ATD) is a hereditary disease often under-diagnosed. The estimated prevalence of A1ATD is known in many countries, but in Brazil until 2005 only isolated cases were published or reported.
Brazilian Association of Alpha 1 Antitrypsin Deficiency (ABRADAT) was founded in 2005. ABRADAT has an education program for physicians and for general population and offer free phenotype tests for COPD patients with possible A1ATD.
The aim of the present study is to describe phenotypes in Brazilian COPD patients with A1ATD.

Methods
This is a descriptive transverse study of the phenotypes of COPD patients with A1ATD, characterized by serum concentration < 80 mg/dL. A paper filter for the blood sample collection was delivered by mail upon request of physicians from several parts of the country. All patients agreed with the test and signed an informed consent.
Results
Between February, 2005 and May, 2010, 106 phenotypes tests were performed in patients with COPD and alpha 1 antitrypsin concentration < 80 mg/dL. The tested samples came from 16 different States (Brazil has 27 States). Eighty eight cases with phenotypes not PiMM were found: 47 PiZZ (53, 4%), 27 PiMZ (30,7%), 10 PiSZ (11, 4%) and 4 PiMS (4, 5%) 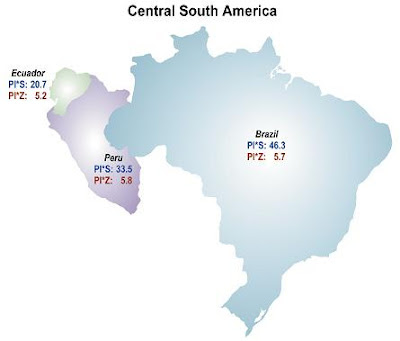 Discussion
In this survey phenotypes PI were identified in selected patients with COPD and A1AT serum levels below normal values. Brazil was discovered by Portugal, and was a Portuguese colony for 300 years. Genetic epidemiological studies show that Portugal has the predominant allele PiS, and de Serres estimated the prevalence of PI*S around 46.3 and PI*Z around 5.7 in Brazil (Figure 2). In Brazilian ethnic composition there is 53,4% of Caucasians, and although most of the immigrants are from Portugal, there are also from Germany, Italy and others European countries, so maybe the prevalence of PI phenotypes is different from de Serres study.
We didn’t have data about the real prevalence of A1ATD in Brazil until now, but this program to identify individuals with A1ATD is important for the appropriate management of these patients.
Conclusion
The most common phenotype associated with A1ATD in Brazil is PiZZ, followed by PiMZ.
Posted by Alexandru Corlateanu at 12:01 AM

Email ThisBlogThis!Share to TwitterShare to FacebookShare to Pinterest
Labels: Alpha One, Alpha One Antitrypsin Deficiency, Brazil