We are continuing preparation for  World Spirometry Day 2012 campaign:  5-km Lung Run, which will take place during the European Respiratory Society Congress in Vienna.

As part of the World Spirometry Day 2012 campaign, various people with lung diseases have been recognised as 'Lung Champions' as a result of their personal achievements in sport and activity.
Today we are happy present you another Lung Champion! 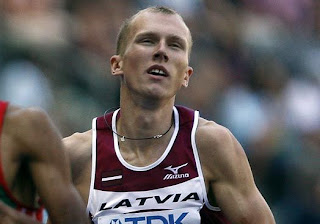 Dmitrijs Jurkevics is a Latvian track and field athlete who specialises in middle- distance running. He has had asthma since childhood but has not let that stop him represent his country on the international stage.
He competed in the 1500 metres at the 2011 World Universade in Shenzhen, China and came sixth in the final. He also holds the Latvian record in 1500 metres. Dmitrijs achieved this result in Prague in June 2011 and bettered that mark by over a second and a half to 3: 37,35 minutes in Sollentuna Grand Prix a few weeks later. He will be representing Latvia at Olympic Games in London.
Dmitrijs Jurkevics said:
“Asthma can’t stop me doing what I enjoy. I know how important it is for anyone to keep active and even walking can be beneficial. It’s no secret that exercise can help you stay healthy and it’s important to make time in a day to do some form of activity – your body will thank you in the future!”

Posted by Alexandru Corlateanu at 7:44 AM